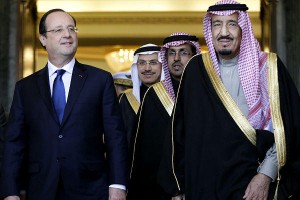 France has agreed to provide weapons aid to Lebanon, its foreign minister said while signing a $3 billion deal with Saudi Arabia, Fox News has reported:

France’s foreign minister says his country has signed a deal with Saudi Arabia to provide the Lebanese army with $3 billion worth of French weapons.

Laurent Fabius said in a brief statement Tuesday that the agreement will help “strengthen the Lebanese army, which is the guarantor of the unity and stability of Lebanon.”

He added that it will also help Lebanon’s military “fulfill its mission to defend territory and in the fight against terrorism during a time at which Lebanon is threatened.” He did not provide any details on the agreement.

There was no immediate comment from Saudi Arabia or Lebanon. But the Lebanese military said Monday that army commander Jean Kahwaji was traveling to Saudi Arabia for the signing ceremony.