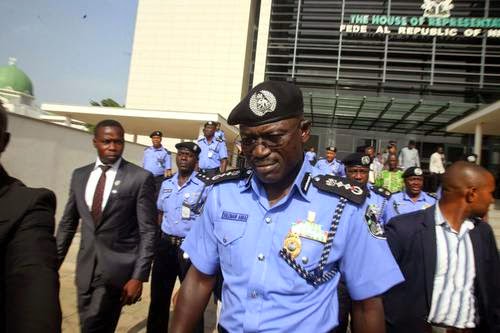 A mild drama played out yesterday as the Inspector General of Police, Mr. Abba Suleiman, on Wednesday, pointedly refused to recognise Rt. Hon. Aminu Tambuwal as Speaker of the House of Representatives for now, saying that it would be contempt of court to comment on the status of Tambuwal as the Speaker.

The House of Representatives Committee on Police Affairs had summoned IGP Suleiman over the invasion of the National Assembly last week by armed policemen, before teargas canisters were thrown in the direction of the Speaker and other federal lawmakers as they attempted to make their towards the House chambers to discuss President Goodluck Jonathan’s request for the extension of emergency rule in Adamawa, Borno and Yobe States.

The police boss had, last week Friday, sent the Deputy Inspector General, Operations, DIG Sotonye Wakama, to represent him, but the House Committee turned him back insisting on Mr. Suleiman’s presence.

However, while addressing the lawmakers, the IGP bluntly refused to recognise Mr. Tambuwal as Speaker of the House, a development that led to the abrupt adjournment of the meeting.

Earlier, the police boss had told the committee members that security beef-up at the National Assembly last Thursday was informed by credible security report that some hoodlums, sponsored by the All Progressives Congress (APC), were planning to hijack the security at National Assembly, Presidential Villa and INEC headquarters.

He added that “bearing in mind what happened to the parliament in Burkina Faso on October 30, 2014”, he had to strengthen security at the National Assembly complex.

This, according to him, included ensuring that the operational procedure of the National Assembly, which is to ensure members identify themselves and be screened, was complied with.

“Some of the principal officers complied until when Alhaji Aminu Tambuwal, at the first gate, came with quite a number of suspected thugs. So the second gate was closed and security reinforced”, he stated.

At this point, some members, including Honourables Akeem Muniru, Chris Etta, Victor Nwokolo, moved that the meeting be adjourned, but Chairman of the Committee, Honourable Usman Kumo, sued for calm.

Honourable Muniru, while decrying Abba’s stance on the status of Mr. Tambuwal, said “the IGP must retract his statement calling the Speaker, ‘Alhaji Aminu Tambuwal’ or I take my leave, as I would deem this sitting an illegal one.

“I can’t participate in a hearing where the office of the Speaker, through whose authority we are having this meeting, is not even recognised by an appointee of the executive”.

Honourable Nwokolo said “I agree with the earlier speaker on the issues at stake, which has to do with the IGP retracting his disrespectful statement about the office of the Speaker”.

At this point, chairman of the committee asked the IGP directly: “Is Aminu Waziri-Tambuwal the speaker of the House of Representatives or not?”

In his response, Mr. Suleiman said: “Mr Chairman, you know that matters before the courts are subjudice. Commenting on them is subjudice until they are disposed of”.

The IGP’s response, however, led to the abrupt adjournment of the meeting with lawmakers refusing to extend the traditional courtesy of seeing off Mr. Abubakar from the committee’s hearing room.