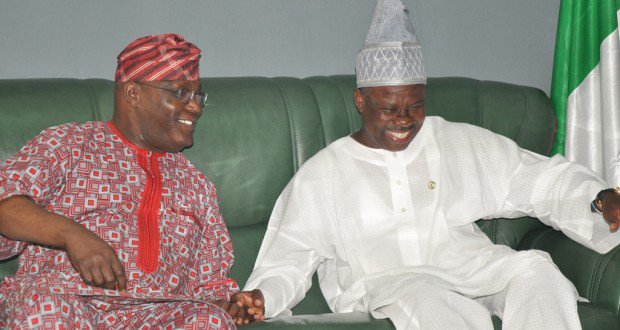 Former Vice-President Atiku Abubakar, weekend, said he is greatly indebted to his former boss, Chief Olusegun Obasanjo and Ogun State for playing major roles in his journey through life.

The presidential aspirant for the 2015 general elections on the platform of the All Progressives Congress (APC) was ex-President Obasanjo’s deputy from 1999-2007.

Atiku, who spoke at Oke-Mosan, Governor Ibikunle Amosun’s Office in Abeokuta, the Ogun State capital, disclosed how long years connection with Ogun State and its people had shaped his life.

He said: “as far as I am concerned, my life itself started in Ogun State because my career in civil servant, as you know started on the border town in Idi-Iroko.

“At that time, that was the only official border town between Nigerian and Republic of Benin and the rest of West Africa.  Then Badagry entry point was not even in existence and Idi-Iroko was my first duty post and it was that place that afforded me the opportunity to meet my wife and married here.

“I am not a stranger in this state.  I have traversed the length and breadth of this state, it was very peaceful, very calm, it was such a wonderful experience. As far as I am concerned to me, this place is home to me and the people of this state are brothers and sisters to me.

“But also come to think of it, the man who made it possible for me through the work of God, to have a national exposure in position of leadership is also from this state, that is my former boss, President Olusegun Obasanjo. So you can see that the connection between me and Ogun.

“When the late Chief MKO Abiola won the election, everybody was expecting that I was going to be his running mate but they did not know that God had something in stock for me not at that time and that it is going to be another period.

“And when President Olusegun Obasanjo became candidate in our great party then, he nominated me to be his Vice President then and that gave me the opportunity to serve this country at the highest level.

” I am greatly indebted to him and the people of this state for that opportunity. When I drove to Abeokuta in the morning, it wasn’t long ago, the kind of physical infrastructure when I come up in the capital is phenomenal and unbelievable.

“And I want to use this opportunity to commend the Governor for his leadership and also recommend continuation of your leadership to the good people of Ogun State.

“You see what has always affect our transformation strides in this nation is that when we change administration, they don’t continue with what their predecessors started so that they can conclude them, they begin new projects and new things.

“The nation building is a continuous process and therefore at a point in time, it requires continuity and it is only when that continuity is achievable that we can see the kind of development that we need”.

On the much touted Transformation Agenda of the Peoples Democratic Party, PDP, the ex-VP said: “PDP will talk on the Television that they have done this and that but they don’t do nothing but if you go to the APC states, honestly, you will see, you’ll feel the kind of transformation that goes on.

“I have said it over and over again because I have visited APC and PDP states. If you go to Sokoto, Lagos, Rivers, Zamfara, Kano, you’ll really, see, feel and touch, not what they tell you on the television”.