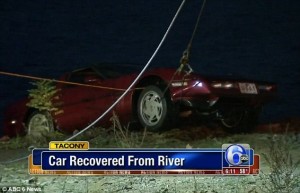 According to the Associated Press, a man going through the pains of a divorce sent his wife’s red Corvette plunging into a river, triggering a search for a possible victim inside the car, police said. Read more:

Officers were called on Monday afternoon about a car in the Delaware River. A witness told them that a man had driven to the riverbank, gotten out and then let the car run into the river, police Inspector Scott Small said.

“I guess he was angry with her and drove her vehicle into the Delaware River,” Small said.

Marine units found the 1990 Corvette in about 30 feet of water, where it was pitch black, and felt around inside to make sure it was unoccupied, Small said. They then attached a tow line so the car could be pulled from the river less than two hours later. Small said investigators later determined that a 50-year-old man had gone to the residence of his wife, who is cooperating with police, and taken the car. He said the description given by the witness matches the husband.

The man is being sought but probably won’t face theft charges because it appears the couple had joint custody of the car, Small said. But he said the man may have violated a protection from abuse order and likely faces charges of reckless endangerment.

Small said it was “extremely dangerous” for divers to have to go down in dark conditions, especially in that area, where the river bottom is littered with car parts, rebar and trash.