Idris Breaks Up With Ellah To Try And Win Back Goitse 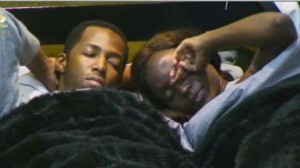 The BBA house has been getting more tensed since the old housemates left.

Idris who first made moves on Goitse then switched his attention to Ellah. He has however decided that he wants to be alone.

Idris broke up with Ellah but there have still been very intimate tension between the two.

After Idris received a message from his mother, Idris told Goitse that his feelings for her are genuine and stronger.

According to him, his mother’s message motivated him to express his feelings.

Goitse replied that she had moved on from whatever they ever shared; which left Idris distraught.

He then left Goitse and went back to Ellah and pulled her to join him in bed.

Share
Facebook
Twitter
WhatsApp
Previous articleMeet The Cat That Can Flush A Toilet. Can You?
Next articleMeet Girl Who Eats 2 Large Bathing Sponges A Week
- Advertisement -