Home Politics If Not For Immunity, Amaechi Should Be In Jail For His Reckless...
Facebook
Twitter
WhatsApp 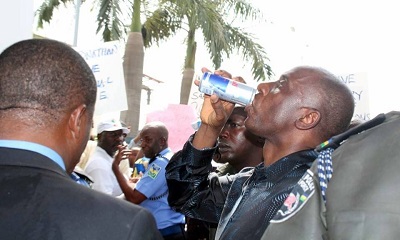 The Presidency on Thursday took Governor Rotimi Amaechi of Rivers State to the cleaners over his threat that the All Progressives Congress, APC, would form a parallel government if next year’s general elections are rigged.

At the “Salvation Rally” organised by the APC in Abuja, Mr. Amaechi, had warned that if the 2015 elections are rigged, his party will not seek redress in court but would rather carry out what he called “civil disobedience as well as form a parallel government”.

The rally was attended by chieftains of the leading opposition party, who did not mince words in accusing the ruling Peoples Democratic Party-led Federal Government of plunging the nation on the path of under-development in the last 15 years.

The rally, which is one in a series of other activities lined up by the APC from now till the 2015 general elections take place in February, also saw a protest march round some parts of the nation’s capital, including the Louis Edet House – the Nigeria Police Force Headquarters.

However, in reaction to the threat by the Rivers governor, the Senior Special Assistant to the President on Public Affairs, Doyin Okupe, in a press conference in Abuja yesterday, said but for the immunity Mr. Amaechi enjoys he “would have been in jail for his comments”.

According to Okupe, the governor’s utterances bother on incitement, treason and gross rascality, which were enough to land him in jail.

He pointed out that there was no basis for Mr. Amaechi to suggest that the elections would be rigged by the PDP, adding that it was a shame for the governor to denigrate himself in such manner.

The presidential aide also noted that the governor’s utterances were a further proof that he was not only lawless but courted anarchy in his unbridled pursuit for power.

“It is curious and unthinkable that a man who was himself a beneficiary of the court process would disdain the very platform through which he acquired the opportunity to make his reckless and provocative statement”, Mr. Okupe said.

“With statements like this it is clear that Amaechi is more of liability to his party than asset and has the potential to bring his party to further opprobrium and disrepute.

“For someone who aspires to become the Vice President of this country, his disdain for law and order is not only unfortunate but also patently dangerous and sends dark signals about the survival of our democracy”.

The presidential aide said discerning Nigerians knew that comments like those made by the governor, do not augur well for any democracy and “also portray Mr. Amaechi as a reckless, power hungry individual who lacks both the democratic temper and respect for constituted authority and institutions”.

He wondered how the APC could be comfortable “with a loose cannon like Governor Amaechi”.

Mr. Okupe said it was clear to any discerning mind that Mr. Amaechi’s indecorous outbursts and his obvious disregard and contempt for the rule of law, had exposed him as unfit to hold any serious public office in this country let alone the Vice Presidency of Nigeria to which he aspires.

He said, “If Mr. Amaechi is so much afraid of his party crashing to defeat in the general elections, what he needs to do is to advise the leadership of his party to either give up in good time or repackage itself in order to appeal to the Nigerian voters who must definitely have the final say in the democratic process.

“We also want to sound a note of warning to Mr. Amaechi and other desperate players on our political scene that Nigeria has moved away from the dark days of dictatorship and resort to brigandage and that any attempt for any individual or group of individuals to resort to extra legal means of acquiring power, would be dealt with by the laws of the land”.