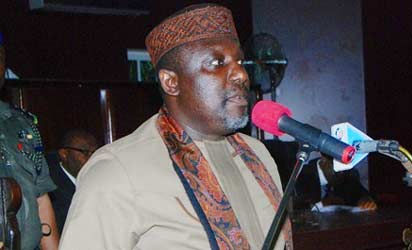 Imo State Governor, Owelle Rochas Okorocha said in Kaduna on Monday that the mission to rescue Nigeria from what he called the “inept leadership of the Peoples Democratic Party” in the 2015 general elections, rested in the hands of Nigerians.

The governor stressed that he was the only one among aspirants jostling for the presidential ticket of the All Progressives Congress that had the capacity to defeat President Goodluck Jonathan in the 2015 presidential election.

Okorocha spoke at a rally which was organized by a northern group, Arewa Peoples Grand Coalition, to urge him to throw his hat in the race for the presidential election.

Earlier, Okorocha had visited the Emir of Zazzau, Alhaji Shehu Idris, and laid a foundation for the Rochas Secondary School in the emirate, which he said would be free.

Okorocha, who addressed the rally in fluent Hausa and English languages, said, “I am the only candidate that can dislodge the PDP in the 2015 presidential election. Tell me of all the people who are eyeing the presidency, how many of them have provided free education.

“There is a need for a change in Nigeria, it is a must, and it must happen. The change has become necessary in our country.

“I believe that if I fly the flag of APC, definitely I will bring victory to APC in 2015. I am the only one who can defeat PDP without struggle. No PDP candidate can face me in the other parts of the country. We don’t have problem with PDP, our problem is how to choose the candidate that can defeat it”.