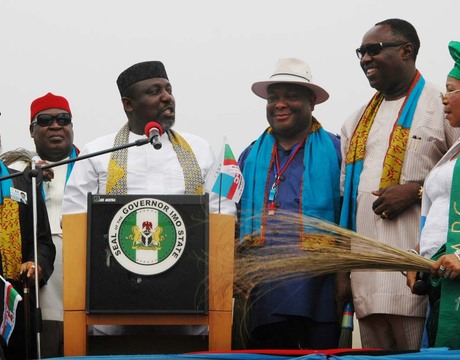 Governor Rochas Okorocha of Imo State on Monday in Enugu declared his intention to contest the 2015 presidential election, saying his victory had been prophesied.

“In 2015 I will be the president of the country”, Okorocha declared amid loud cheers from broom-wielding members of the All Progressives Congress, APC, at a rally attended by prominent members of the party in the South-East.

The rally came on the heels of a similar one held in Abia State at the weekend.

The governor, who spoke in Igbo and English languages, said his emergence as the country’s president after the 2015 presidential polls would come as a surprise to many, particularly the ruling Peoples Democratic Party.

Okorocha, whose speech was laced at intervals with exclamations of “my people, my people”, also debunked speculations that the APC presidential ticket was zoned to the North.

He said, “Three months ago when I said I want to be president they asked, “Can an Igboman be president?

“But now when they count those contesting for president they will first count Rochas Okorocha, before Buhari, Atiku Abubakar and Kwankwaso.

“When they said they have zoned the presidency to the North, I asked, ‘When was the meeting held?’

“Now we have zoned it to Igboland. In 2015, there will be a turnaround in the fortunes of Ndigbo”.

Recalling the suicide bombing at a school in Yobe State earlier on Monday, which left 48 people killed and over 70 others injured, Okorocha said that the PDP had failed God.

He said Igbo people had been neglected by President Goodluck Jonathan such that no Igbo man is currently occupying any prominent position in the country.

He also accused prominent Igbo politicians in the ruling PDP of not putting the general interest of the South-East region at heart.

“They only know themselves; they don’t care about Igbo. APC is an emergency party for a new Nigeria; I would not have joined APC if PDP was doing well. We will defeat PDP in 2015”, he again declared.

The aspirant boasted that he had the resources to achieve his ambition, noting that he was richer than his rivals in the PDP.

He also used the occasion to present two APC governorship aspirants in Enugu State, Dr. Ifeanyi Asogwa and Okey Ezea, to the crowd.

Addressing the two governorship aspirants as “excellencies in waiting”, Okorocha advised them to emulate his achievements in Imo State when anyone of them eventually wins the Enugu governorship race.

He urged the people of Enugu to vote the APC aspirants, whom he described as “my people in whom I am well pleased”.

A former governor of Anambra State, Senator Chris Ngige, and many other APC chieftains were at the rally.