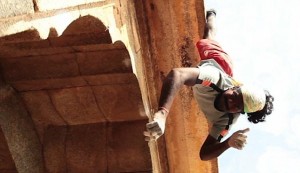 An Indian man also known as the “Spider-Man” for his ability to scale buildings with his bare hands has said he has his sights set on the world’s tallest skyscraper. Read more and watch him on UPI:

Jyoti Raju, 27, regularly wows locals and tourists by scaling the walls of a 17th century fort near his home in Chitradurga and he says he practices every day by climbing any surface he can find.

“I have been given the nickname Spider-Man by many people,” Raju told the Daily Mail. “I have never used safety gear while climbing. I have injured myself many times. I have metal rods all over my body from injuries. But I like pain, I will not feel bad if I get hurt — instead I accept it is a part of what I do.”

Raju said his goal is to scale the world’s tallest building, the Burj Khalifa in Dubai.

“An Indian should climb it and set the world record. If myself or one of my students achieves that, then I will be more than happy,” he said.