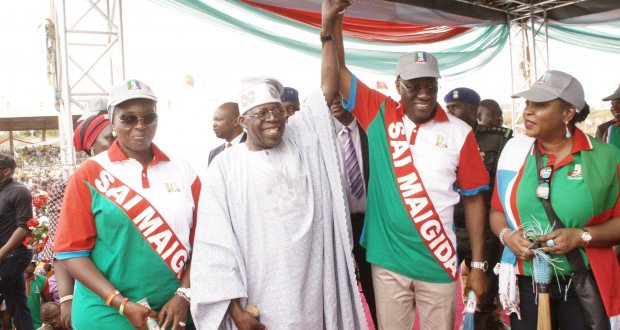 A National Leader of the All Progressives Congress (APC), Asiwaju Bola Ahmed Tinubu, on Wednesday said President Goodluck Jonathan’s administration lacks the political will to tackle the security challenges head on.

The former Lagos State governor, therefore, called for the president’s resignation from office.

The former governor said: “Let me forget the protocol, because you are the votes. You are the people who must vote. We bring the greetings and respect of Lagos, Oyo, Osun, Ogun, Ekiti, Edo, Rivers, Akwa Ibom and the entire APC states in Nigeria.

“What I want to beg of you is to be ready to defend for change. The race has started again. We have endorsed Governor Abdulfatah Ahmed for second term in office as he has performed creditably well just like his predecessor, Senator Bukola Saraki”.

Referring to the PDP-led federal government, he said, “The thieves that daily steal your money. They have not given you any job; they cannot create jobs and they are starving states of funds to pay workers salaries. The best thing to do is to sweep them away through broom revolution. APC is a party of the masses.

“I saw the sea of refuges and the lies coming from Jonathan’s administration. They have exhibited failure, lack of capacity, vision, creativity; the lie of yesterday is what they repeat today and it is what they will repeat tomorrow. They are lying to you. They are lying about the security; toying about the security of this country. I don’t have time to explain the logic of their lies.

“But if you control the armed forces and you are the Commander-in-Chief of the armed of the federal republic, why should any part of this country be under occupation? And you give us excuses every day. In any civilized country Jonathan should resigned. But if he will not resign he should wait for our broom we will sweep them.

“It now behooves you to begin a house to house campaign that this is a party of the masses. You had not seen Bukola and myself mounting the same podium campaigning for the same party before this time. This is a new beginning. This is a time of good things and tidings from us. We have brought good luck and commonsense revolution”, he said.

“I will come back. This is just the endorsement of Governor Ahmed; that he will be re-elected by the grace of God with the support of you people here and those outside there. The unemployment situation will be conquered by this administration of APC. We have the vision for the security of the lives of our children”, he stressed.