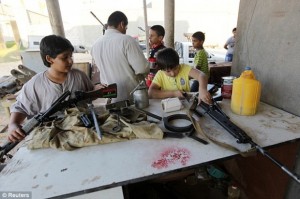 Teenagers carrying weapons stand at busy intersections and checkpoints in Iraq’s second-largest city, Mosul. Patched onto the left arms of their black uniforms are the logos of the Islamic Police. AP has reported:

In Raqqa, the Islamic State group’s de facto capital in Syria, boys attend training camp and religious courses before heading off to fight. Others serve as cooks or guards at the extremists’ headquarters or as spies, informing on people in their neighborhoods.

Across the vast region under IS control, the group is actively conscripting children for battle and committing abuses against the most vulnerable at a young age, according to a growing body of evidence assembled from residents, activists, independent experts and human rights groups.

In the northern Syrian town of Kobani, where ethnic Kurds have been resisting an IS onslaught for weeks, several activists told The Associated Press they observed children fighting alongside the militants. Mustafa Bali, a Kobani-based activist, said he saw the bodies of four boys, two of them younger than 14. And at least one 18 year old is said to have carried out a suicide attack.

In Syria’s Aleppo province, an activist affiliated with the rebel Free Syrian Army said its fighters encountered children in their late teens “fairly often” in battles against the rival Islamic State group.