Israel Lifts Age Restrictions For Muslims at the Temple Mount 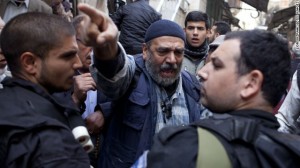 The Israeli police on Friday dropped age restrictions at the Temple Mount, which now mean that Muslims of all ages are allowed to pray at the holy site. But police said they would keep their “high alert status” at the Al-Aqsa mosque. CNN was there:

The Temple Mount has been a flashpoint for violence, and in recent weeks, entry has been limited to women and men above the age of 35. Authorities feared that younger men and teens would cause disturbances.