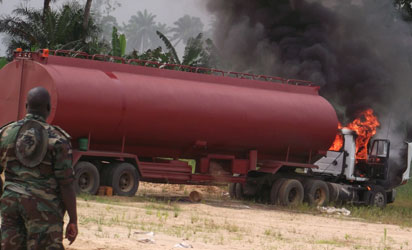 The Joint Task Force (JTF) in the Niger Delta, Operation Pulo Shield, said it had destroyed a depot for stolen crude and set ablaze two trucks with crude in Eleme community in Rivers.

A statement signed by Lt.-Col. Mustapha Anka, the Spokesman for the task force issued in Yenagoa on Saturday, said that the building housing the illegal depot was demolished during the operation.

According to the statement, the illegal crude storage facility was connected to a 28-inch compromised Rukpoku-Bonny crude oil pipeline operated by Shell.

News Agency of Nigeria (NAN) reports that the pipeline was breached at Elelewo Community in Eleme Local Government Area of Rivers and a hose connected to the illegal storage facility.

The storage facility consisted of a well reservoir where the stolen crude was stored before loading to trucks between 12.00 am and 4.00 am.

“Two trucks with 45,000 liters capacity each, loaded with stolen crude oil were intercepted and arrested during the operation.

“One of the tankers arrested had registration number RV XA 356 BGM, while the second had no plate number.

“The loaded trucks were about leaving the premises before the anti-oil theft team of the task force intercepted them”, the JTF said.

The JTF said that no arrest was made as the suspects absconded on sighting troops.

“The trucks and contents with the hose were taken to a safe location and destroyed in line with mandate of the task force.