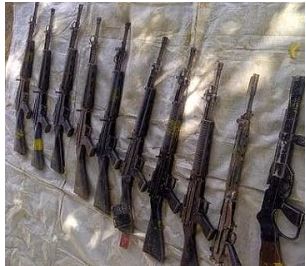 Deputy Superintendent of Police Nanbol Audu, who was the officer in charge of the Kaduna Armory, has killed himself days after he was paraded with two others for stealing and selling police weapons to criminals and rich people in the state. He was paraded this past Monday October 27th
DSP Audu, an officer who had served in the police force for 30 years and was due to retire in five years, shot himself in the stomach around 5.40am today October 31st inside his detention cell at the police headquarters in Kaduna, it was announced on radio today. The state police commissioner Umar Shehu confirmed the incident.
According to the state police commissioner Umar Shehu, the three men were arrested on October 20th as they tried to leave with 11 rifles that had been provided by DSP Audu from the state armory.
A search on them by other suspicious police officers revealed the stolen armory and N400,000 cash. When interrogated, Audu confessed to the crime and said he provided the guns to the men for personal protection from the Fulani herdsmen who were killing his people in Jos, Plateau state.