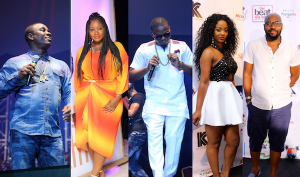 On Friday, November 21 wasn’t just like any other Friday as it was the day the biggest concert this year so far went down.

The concert featured different genres of Fuji and pop and was thrown by K1. It held at Eko Hotel and Suites, Victoria Island, Lagos and featured exciting performances from some of the biggest names in the Nigerian music industry.