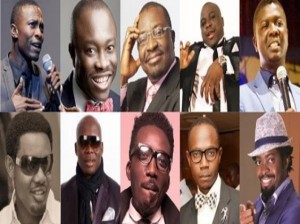 I came across this report online and I must confess that I was amazed at how much this men who seem so un serious are raking into their accounts.

Ali Baba, the father of stand-up comedians in Nigeria once said: “comedy is a funny business, a very big business.”

According to Naijabrain, this is the latest list of 8 comedians in Nigeria that tops the earning list.

Ali Baba is the richest comedian in Nigeria if not the whole of Africa. He once had a two year endorsement deal with a multinational firm worth N100 million. Over the years he has invested in banking, events management, and entertainment/recreation businesses.

Acclaimed as the godfather of Nigerian comedy Ali Baba who is also known as Atunyota Alleluya Akporobomerere (what a mouthful) is credited with starting the revolution that brought in a wave of comedians such as Basket Mouth, Opa Williams, Julius Agwu, Okey Bakassi, Gandoki, Gbenga Adeyinka D 1st etc.

Ali Baba took comedy business to another height in 1998 when he registered his company, “Ali Baba Hiccupurathird.” That same year he erected three billboards in strategic locations in Lagos: Ozumba Mbadiwe Street, Victoria Island; Osborne Road, Ikoyi and in Marina. He paid N150, 000 for each billboard per year for two years. The billboard carried a simple message, “Ali Baba –Being Funny Is Serious Business.”

Basketmouth is one of Nigeria’s most recognisable faces in comedy. His annual income consists of several endorsement deals, Globacom (He has been the longest serving Glo ambassador) and several more. His ‘Basketmouth Uncensored’ sells out annually in locations like South Africa, London and the United States. He has been one of the most consistent comedians in the comedy industry. He has also invested in brick and mortar businesses like night clubs. His annual income (life performances, endorsement deals, TV shows etc) is estimated in the range of N150 – N250 million with his flagship ‘Basketmouth uncensored’ showed pulling in over N100 million per annum.

The Rivers state born comedian is a vastly talented person combining his comedy talents with acting and occasional song-making. In 2013 he released two singles ‘rejuvenate’ and ‘mama soup’ and took his growing comedy show ‘Crack ya Ribs’ to London. He also organised the ‘Laugh for Christ Sake’ show. He owns real laugh entertainment an event management firm along with choice properties in several states. he is rumoured to be well connected politically and eying a political position in the upcoming elections.

The 40 year old makes his money from live shows, his hosted show ‘Crack Ya Ribs’ and advertisement endorsements. He made around N20 million when he launched his book at age 40 recently. Estimated annual revenue is between N150 – N200 million

Francis Agoda (aka I Go Die)

The comedian I Go Dye is also a businessman extraordinaire. The United Nations Millennium Developmental Goal Ambassador is believed to own a few businesses which include a property and Real Estate Company and a bottling water company nearing completion. The Delta State-born humour merchant acquired N14 million worth White-Diamond Cadillac Escalade Hybrid 2012 Model (Platinum Edition) and a reported N7 million worth Range Rover Evogue.

His annual income is estimated to be around N200 million

Gbenga as well as being a comedian is a well known event anchor and MC. He has a show Laffmatazz and anchors a very healthy number of political and social events all year round. He has a very lucrative deal with Nigerian Breweries over the past few years. He earns between N100 – N150 million per year.

AY is thought to make N1 – N2 million per show and runs A.Y. Live events which basically is an events organiser and management firm. His AY show won Best TV Comedy show in 2008; his monthly AY’s Open Mic Challenge has also provided an avenue to unearth fresh talents. Linked to owning a club (or at least working on launching one) he pulls in at least N150 million per annum.

The comedian and actor also anchors high level social events as well as held an appointment as a special assistant to the Governor in Imo State which essentially boosted his income enough to place him in this list of highest earning comedians in Nigeria.

This dude appears to be the hottest thing in comedy now. He does live events and is believed to also run a couple side businesses along with tours of his comedy show. It’s unclear exactly how much he earns but he does bring in enough to be here.