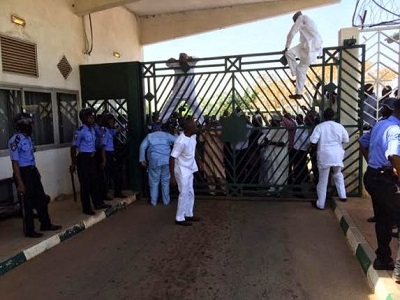 Following the fracas which ensued between some members of the House of Representatives and detachment of policemen deployed to the National Assembly on Thursday, the Force Headquarters has blamed the Speaker, Aminu Tambuwal, for the breakdown of law and order.

Policemen stationed at the gate of the National Assembly had earlier today denied Mr. Tambuwal and some federal lawmakers entry to the sprawling assembly complex where they were slated to deliberate on President Goodluck Jonathan’s letter to the House of Representatives, requesting their approval for the extension of emergency rule in three Northeastern states of Adamawa, Borno and Yobe.

Despite the speaker identifying himself to a senior police officer present and pleading with them to open the gates so he could enter, the security operatives remained adamant until some rep members forcefully pushed the gates apart and charged in. The development forced anti-riot policemen to shoot tear-gas canisters in a failed bid to disperse them, resulting in chaos.

Justifying the action, which has been condemned by the leading opposition party, the All Progressives Congress, a statement signed by the Force Public Relations Officer, Acting CP Emmanuel Chuwkwu, said the unusual high presence of policemen at the National Assembly complex was informed by “intelligence report of a likely invasion of the House of Representatives by hoodlums and thugs” and the need to prevent a breakdown of law and order.

According to the statement, the Police condoned the area and began screening of all members and visitors alike before they were allowed to enter the premises.

“In the course of this lawful exercise”, the statement explained that Mr. Tambuwal arrived the venue with a “motley crowd, who broke the cordon, assaulted the Police and evaded due process and the Police had the duty to restore order and normalcy, using lawful means.

“The IGP seizes this medium to warn all political actors and their followers to respect constituted authority and due process and to desist from the use of thugs to pursue their agenda.

“The Nigeria Police shall continually apply all lawful means to prevent a breakdown of law and order in all segments of the society and shall apply the full weight of the law on any political actor who violates the peace and security of the nation”, the statement concluded.