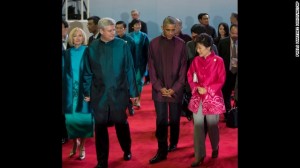 President Barack Obama has announced a new reciprocal 10-year visa policy for tourists and businessmen between the United States and China. With the new agreement, citizens of each country can travel between the two countries for up to 10 years on a single visa, this putting China on level footing with other major trade partners like Brazil and several European countries. Travelers can currently receive one-year visas. CNN reports:

“I’ve heard from American business leaders about how valuable this step will be. And we’ve worked hard to achieve this outcome because it clearly serves the mutual interest of both of our countries,” Obama said Monday at a summit of the Asia-Pacific Economic Cooperation.

Obama is currently on a weeklong sprint across Asia and the Pacific that will take him from China to Myanmar and Australia, marking an opportunity for Obama to address major foreign affairs and economic challenges as the U.S. continues its pivot to Asia, which Obama promised early in his presidency.

The change is expected to be a boon for the U.S. economy, creating up to 440,000 American jobs by 2021 because increased tourism and business spurred by visits from more than 7 million Chinese that would generate nearly $85 billion in revenue, according to a White House estimate.