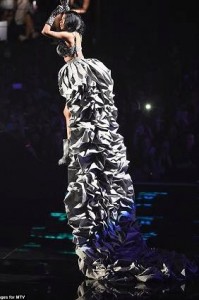 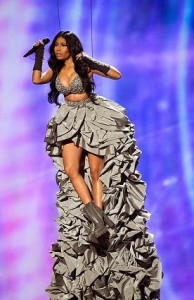 While she’s receiving heavy criticism for a recent video which seem to portray Adolf Hitler as a hero, the superstar rapper isn’t too concerned as she does what she does best.

The Young Money rapper — Nicki Minaj was the host of the MTV EMA which held yesterday Nov 9 at Glasgow.

Nicki made a grand entry as she landed on stage in a spectacular ruffle hem dress that featured a 14ft train.