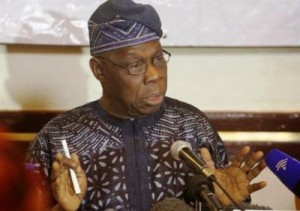 Speaking on Wednesday, at the presentation of an autobiography of the former president of the Court of Appeal and pioneer chairman of the Independent Corrupt Practices and Other Related Offences Commission (ICPC), retired Justice Mustapha Akanbi in Abuja, Obasanjo said the country may end up borrowing to pay salaries.

Although, the Federal Government had proposed a review of the oil benchmark from 77.5 dollars to 73 dollars for the 2015 budget, following continued decline in oil prices, the former president, apparently oblivious of the new development said “With the figure of $78 per barrel as benchmark, we will be in a bind if oil price falls to $75 per barrel.

“I am made to understand that Saudi Arabia used $68 as benchmark for the 2015 budget. Our inadequate protection of almost all local industries with heavy cost of energy has dealt a hard blow on most indigenous industries,” he pointed out.

Obasanjo said that if the country does not expedite action and do something about the current situation, it will get to a point where Nigeria would not be able to fund its budget. “We may have to borrow to pay salaries and allowances”, he said.

He also described the administration of President Goodluck Jonathan as one supportive of corruption. This, he said has greatly harmed the economy.

“For quite some time, the covered and hushed up corruption has had its toll on the economy,” he said.

He also stressed the need for Nigeria to diversify its economy, saying “Our continued heavy dependence on one commodity has not adequately prepared us against any shock in that one commodity in the international plane.”

The price of OPEC basket of twelve crudes stood at $73.70 a barrel on Wednesday.