Nigeria has again ranked low in the Africa Prosperity Index coming at 27th out of the 38 countries on the continent. The country was 24th in the last ranking published in 2012.

The country has recorded an impressive economic growth in recent times, with the rebasing of its economy in June making it the largest economy in Africa. However, the economic growth of the country seems not to be trickling down to the common man on the street, with majority of the population not benefiting.

According to The Africa Prosperity Report, poor infrastructure, weak governance, unfriendly business climates, inadequate healthcare, as well as safety and security concerns, are some of the challenges the report highlighted as possible hindrances to long term development and prosperity. 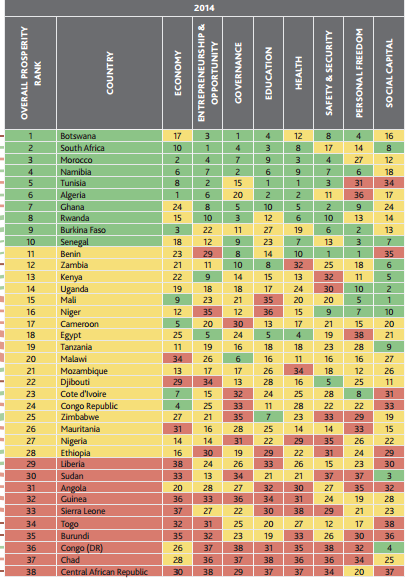 The 2014 Africa Prosperity Report identifies and examines three distinct groups of people who are identified as drivers of African prosperity. They include the well-educated, female entrepreneurs and the middle class. “By supporting education quality, female entrepreneurship, and the rising middle class, African countries could avoid a future where inequality and chronic poverty persist alongside wealth and prosperity.” said Solene Dengler, a Research Analyst for the Prosperity Index.

Taking a critical look at the Nigerian education sector, the report noted that despite substantial improvements in the Nigerian economy, education performance still lags behind.

In Nigeria, there are around 64 million people between the ages of 15 to 35 (more than one third of the overall population). Secondary school enrolment has grown significantly at 8.2 percent per year between 2000 and 2010 compared to a 2.7 percent population growth in the same period (Dalberg 2014). However, enrolment rates are still low and stand on average at 64 percent (primary) and 44 percent (secondary) in 2014 compared to 82% and 50% for 38 African countries.
Moreover, in this same period, the out of school population has also grown. Nigeria now has an out of school child population
of 10.5 million, the highest in the world (UNESCO 2014).

Besieged by Boko Haram insurgency, which reportedly led to the death of 47 students in a suicide bombing on Tuesday, Nigeria ranked 35th in safety&security, while it ranked 26th and 22nd in personal freedon and social capital respectively.