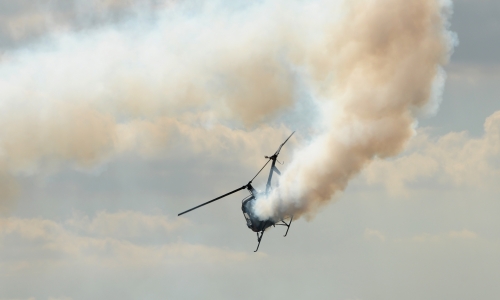 Three people have been confirmed dead in the helicopter crash which occurred on Thursday night around the Federal University of Technology in Yola, the Adamawa State capital, the Nigerian military has said.

In a terse statement posted on the Defence Headquarters blog, the military authorities said the victims were crew members aboard the ill-fated helicopter.

“At about 2200hours yesterday 13 November 2014, a ground attack helicopter on an armed patrol crashed around the Federal University of Technology Yola, Adamawa State”, the military said in the statement.

“The crew of 3 was lost in the ill-fated accident.  Rescue party worked throughout the night to preserve the wreckage of the aircraft and scene of the accident for proper investigation to be carried out.  Further details would be made known later”, it concluded.

The helicopter crashed less than 72 hours after another one on routine surveillance mission went down in Damare, a suburb of Girei Local Government Area of Adamawa state. No life was lost in that crash.