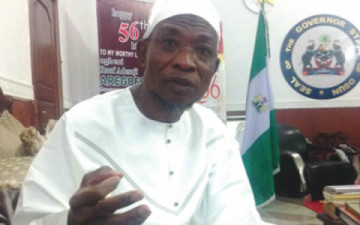 The Governor of Osun State, Ogbeni Rauf Aregbesola, has decried the apparent loss of emotion of Nigerians as a people, with their indifference towards deepening security crisis in some parts of the north, which has seen thousands of lives wasted by the Boko Haram sect.

While delivering a lecture titled, ‘Federalism, democracy and the future of Nigeria’, during the Convocation and 66th Foundation Day, University of Ibadan, on Tuesday, Gov. Aregbesola said rather than be in a somber mood over the suicide bombing of schoolchildren and teachers in Potiskum, Yobe State, on Monday, Nigerians were going about their normal lives as if nothing happened.

The governor said, “It is unfortunate that even if we should ask ourselves what the mood of the nation should be now, we do not know. Nigeria should be mourning by now. Nigeria’s flag must fly at half-mast now. We should be wearing mournful look and ask ourselves how we got to be where we are now. Fifty of our schoolchildren and teachers were killed in a suicide attack on Monday in Potiskum and we act as if it is normal.

“We don’t even have the feeling anymore, the conscience, the emotion and the fact that the only thing we have is life.

“I will not be where I am today if I had been slaughtered like that in school. That is just one of the statistics. In the same Yobe, some students were slaughtered at night; while in Borno, schoolgirls were taken away and yet to be found or returned.

“Territories of Nigeria are been paraded by lunatics, mad men who could not be called normal human beings. Yet, we carried on as if all these do not matter. We have forgotten that whatever is happening to a neighbour is a sign of what could come to others”.

Aregbesola also expressed sadness over the erosion of the visions of the nation’s founding fathers, saying that the country could be heading for doom because of the latest oil discoveries by nations that hitherto depended on Nigeria’s oil as well as the dwindling price of oil in the international market.

He said, “Sixty-six years ago, when UI was founded and Nigeria was the morning star of Africa, the founding fathers of Nigeria never thought that this kind of thing would happen to us. But alas, if anything, it appears we are worse than we were in the 60s.

“The oil price crisis is telling us that in 10 years time, oil will amount to nothing. Less than 18 months ago, the US depended on our oil, today US exports oil to other nations. If India, which is already showing the technological capacity, follows suit just as others, we are doomed. If in autumn, oil price is falling, what will happen between May and September? It is not the price that is worrisome but the fact that we now depend absolutely on oil without any belief in the fact that wealth is created by production”.

“There is a carry-over of the military mentality to our current democratic dispensation. The state governors are mere prefects replaceable by presidential fiat rather than democratic process since 1999. Federal Government orchestrates crisis in states to remove executive governors, usually with simple minority”, the governor said.