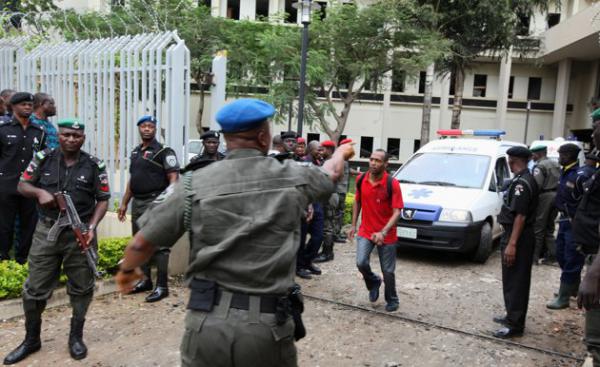 The Cross River Police command has confirmed that an explosion occurred in the early hours of Monday at the State Secretariat of the Peoples’ Democratic Party, PDP, in Cross River.

This was confirmed in a statement signed by the Police Public Relations Officer, Hogan Bassey, and made available to the News Agency of Nigeria in Calabar on Monday.

Mr. Bassey stated that an Improvised Explosive Device, IED, was detonated by “hoodlums, who were unable to penetrate the heavily fortified PDP Secretariat” on Nov. 24.

“Early today, 24th November at about 0535 hours, hoodlums who were unable to penetrate the heavily fortified secretariat by officers and men of the Command, threw an explosive device from behind the premises into the building.

“The explosion only shattered some louvres on the ground floor. No life was lost nor anybody sustain injury. The Police anti-bomb Squad has cordoned off the area”, it stated.

But witnesses told journalists that the explosion rocked several buildings in the vicinity of the party secretariat on Murtala Mohammed High Way, Calabar.

Heavy presence of armed policemen and soldiers was noticed at the scene of the incident Monday.

A resident of one of the houses close to the PDP secretariat where the incident occurred, said that his house vibrated when the explosion occurred.

“I heard a loud bang and everywhere started shaking. I thought the house was going to collapse”, he said.

At another compound sharing a perimeter fence with the secretariat, several glass doors and windows were shattered.

The state PDP Chairman, John Okon, who also spoke on the incident, said the party secretariat would no longer be used for the ward congress slated for the day.

“I understand they threw in a bomb or dynamite or something. The police are there and the anti-bomb squad are on the way.

“We will not be able to use the secretariat for the ward congresses. We would be using the Presidential Lodge.

“All the electoral officers are collecting their materials and going to the field. The windows and other things inside the office were destroyed”, he said.

Reacting to the developments, the Director-General, Ndoma-Egba campaign organisation, Ernest Irek, alleged that the PDP ward congress had been militarised.

“They are militarising a simple thing as ward congresses and chasing away party members”, he said.

He also alleged that the explosion was staged so that the venue could be changed to suit some interests, adding that the list of delegates was not made available to the public.