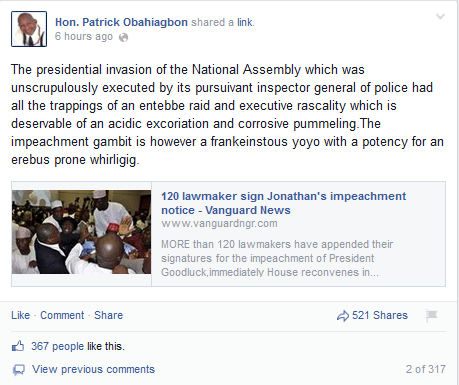 Former member of the House of Representatives, Hon. Patrick Obahiagbon has described the political drama which played out Thursday at the National Assembly as a display of ‘executive rascality’.

The former lawmaker, who is currently Chief of Staff to Governor Adams Oshiomhole of Edo State, reacted to the development via a Facebook post on Friday.

He wrote: “The presidential invasion of the National Assembly, which was unscrupulously executed by its pursuivant Inspector General of Police, had all the trappings of an Entebbe raid and executive rascality which is deservable of an acidic excoriation and corrosive pummeling”.

Mr. Obahiagbon added that “The impeachment gambit is however, a frankeinstous yoyo with a potency for an erebus prone whirligig”.

As expected, the statement is generating a lot of buzz on the former rep member’s Facebook page with over 300 comments, 367 likes and 521 shares as at the time of publishing this report.