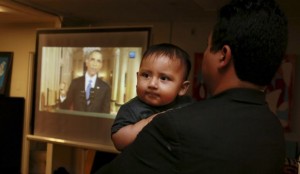 U.S. President, Barack Obama has imposed the most sweeping immigration reform in a generation by easing the threat of deportation for about 4.7 million undocumented immigrants in the United States and consequently setting up a clash with Republicans who vow to fight his moves. Reuters was there:

In a White House speech, Obama rejected Republican arguments that his decision to bypass Congress and take executive action was tantamount to amnesty for illegal immigrants.

It was his biggest use of executive actions in a year in which they have become his signature way of working around congressional gridlock.

“Amnesty is the immigration system we have today, millions of people who live here without paying their taxes or playing by the rules,” he said.

Republicans pounced quickly, charging Obama had overstepped his constitutional powers a year after declaring he did not have the authority to act on his own.

In a video released before Obama’s televised speech, House of Representatives Speaker John Boehner said: The president has said before that ‘he’s not king’ and he’s ‘not an emperor,’ but he sure is acting like one.”