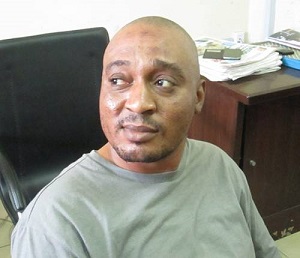 The suspect was also said to have impersonated the Chairman of EFCC, Mr. Ibrahim Lamorde.

A statement by Head of Media and Publicity of the EFCC, Mr. Wilson Uwujaren, said investigation into the case was still in progress.

The statement said: “The 44- year- old Ordinary Diploma certificate holder in Textile and Polymer Technology was picked up by operatives of the commission in Lagos for allegedly duping one Precious Chukwuma Emelue of N100 million by deceiving him into believing that he would assist him in retrieving $1million from a Pakistani bank: Kan-Cern Limited, which payment was allegedly stopped by the International Monetary Fund (IMF).

“Emelue claimed that, in 2012, he met one Mr. Perry Kandoharty (a Diplomat with the Pakistani High Commission) in Lagos. In the course of their discussions, Emelue told Kandoharty that he was widely experienced in deep-sea fishing. And after much deliberation, they both agreed to work together on a business.

“Emelue would provide land for a fish processing factory in Nigeria and space for the development of fish ponds. Emelue claimed that Kandoharty sent him a mail informing him of a deposit of $1,000,000.00 into Kan -Cern Limited.

“It was this fund, allegedly stopped by IMF, which Balogun made him believe he could pull out for him.

“In the course of his dealings with Emelue, Balogun allegedly obtained money in different installments from him ‘to obtain certificates from authorities’ handling drug, anti-terrorism and money laundering issues”.

The suspect was also alleged to have impersonated the Executive Chairman of the EFCC, Ibrahim Lamorde and used his name to extort money from his victim.

But Balogun denied the allegation that he impersonated the EFCC chairman.

“I didn’t call myself Lamorde. What I told him was that Lamorde was a lion and I’m the only tiger that can approach him”, he was quoted as saying.

The statement added that several items were recovered from the suspect during a search of his house.

They included documents bearing the names of the State Security Service (SSS); Central Bank of Nigeria (CBN); and Insurance companies among others.

“Balogun would be charged to court as soon as investigation is concluded”, the statement concluded.