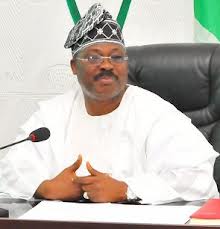 The Oyo State chapter of All Progressives Congress, APC, has praised the initiative of Governor Abiola Ajimobi and the leadership of the 33 local government councils to collaborate and embark on construction of intra-city roads in their respective domains in fulfillment of the promise made to the people by the state government.

Some residents of the state had in the past few days lauded the APC-led government in the state for either carrying out repairs or construction projects on many roads the party claimed had been abandoned for long.

“Virtually all the caretaker chairmen in the 33 local government areas in Oyo State have flagged off two or more important road construction projects in their council territory to complement the efforts of Senator Abiola Ajimobi on improved road networks for the people of the state”, the party noted.

In a statement issued by its Director of Publicity and Strategy, Olawale Sadare, the state APC recalled that the development was a testimony to the seriousness which political office holders on its platform attached to addressing issues that affect the masses as well as a pointer to the fact every promise made to the people would be fulfilled regardless of the odds.

“We recall that our party made an appeal to the people of the state to remain calm when there was this insinuation that attention was paid to only major roads while most intra city ones were in deplorable conditions. Some of the principal actors in the present administration even came out to assure that most of the roads in question would receive a facelift immediately after the intensity of the seasonal rains must have subsided”.