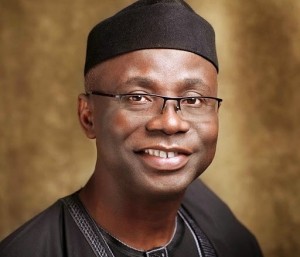 Famous Pastor Tunde Bakare has made headlines after he voluntary left the infamous Deeper Life church.

Tunde Bakare is now Pastor of the Latter Rain Assembly and would mark his birthday on the 11th of November, he’ll turn 60.

In a new revealing interview with TheNewsNigeria to mark his coming birthday, the man of God explained why he suddenly abandoned Deeper Life after being there for 5 years.

That’s what you call memory lane. I was in Deeper Life for five years, between 1978 and December 1983. Brother Kumuyi was and is still a great teacher of the Word. The person that put the fear of God in me was Brother Kumuyi. He laid the foundation for systematic teaching that many people see me do today.

However, I rose through the ranks. I preached while I was there and conducted youth meetings. I was doing some legal works for the ministry also. I registered some of their companies.

But one day, while I was ministering and a brother was interpreting, I was giving example of the “faith cometh by hearing and hearing the word of God” and I said, ‘Supposing you go to a supermarket to buy soap, you might not know what soap to buy but because you watched the advertisement of Joy soap on television, then you would look for Joy soap because you have been hearing about it.’ And my interpreter said: “If you have been watching the devil’s box…”

I told him I didn’t say devil’s box but television, and he repeated saying the devil’s box and Brother Kumuyi was behind us. I said I didn’t say devil’s box and that the normal interpretation is amu ohun mu aworan, (the box that captures both the voice and the visuals). Anyway, he still said what he said. The following Sunday, Brother Kumuyi came up with what he called “Sunday Exaltation”; he said that even if you repair television, you are a child of the devil. Then I took my Bible and left. I went home and said I would serve my God, but was not interested anymore in church.

So I returned to Surulere Baptist Church. And one day, my photographer came to me and said I should not just sit like that and that I should come and join his church because I would enjoy it. I asked, ‘What is the name of your church’ and he said The Redeemed Christian Church of God. I said okay and that I would come one day since I was not interested at that moment.

The first Sunday of March, 1984, I invited my wife and said we should go (we were not married then). I borrowed a car because I had no car then. We drove to that church and I discovered I had been to that church before. That was the place Deeper Life was doing their Bible study in 1978. Then there was this gentleman who walked up, they called him G.O. He is still G.O. today, but they call him Daddy G.O. He was the one who preached that day and the message was titled: “The Mercy of God.” I said this seems better than the background of what seems I was coming from, because, in fairness to Brother Kumuyi, he himself eventually went on television. He must have changed his mind, because that time he was very hard on such things.

By the way, looking back today, there is a lot of evil on television. It is not the television that is the devil’s box, it is the programmes that people put on it. So you can choose what you watch.