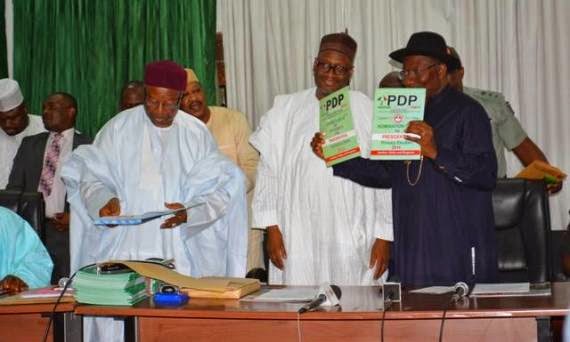 The national leadership of the ruling Peoples Democratic Party has reversed its decision on the sale of its presidential nomination form as it has informed those who may want to contest the presidential primary with President Goodluck Jonathan to go ahead and pick the form.

However, the party is insisting that the deadline for the submission of the form and indeed forms for all other positions, would be Thursday.

A statement by the National Publicity Secretary of PDP, Olisa Metuh, on Monday in Abuja, said “All aspirants, who paid for nomination forms, including the Presidential Form but yet to collect same, should come to the PDP National Secretariat, Wadata Plaza, Wuse Zone 5, Abuja with verifiable evidence of payment for purposes of collection of their forms”.

It would be recalled that Dr. Abdul Jhalil Tafawa-Balewa, son of Nigeria`s first Prime Minister, Alhaji Abubakar Tafawa-Balewa, had earlier paid for the PDP presidential forms to contest the election in 2015.

Prof. Akasuba Abiola, wife of late business mogul, Chief M.K.O. Abiola was also at the party`s headquarters earlier to pick the forms for the presidency.

However, both aspirants had alleged in separate interviews with journalists that though they paid the required fees to purchase the forms, the PDP leadership denied them the forms.