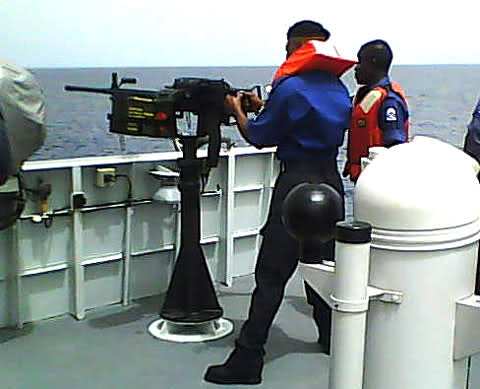 The Nigerian Navy on Tuesday debunked claims that piracy and kidnapping on the nation’s territorial waterways have been on the increase.

According to the Chief of Policy and Plans, Rear Admiral Ameen Ikioda, the Navy was doing its best to ensure the prevention of maritime related crimes in the nation’s territorial waters.

Speaking while briefing journalists on the forthcoming Chief of Naval Staff Annual Conference with the theme ‘Transforming for Enhanced Nigerian Navy Operational Efficiency’ scheduled to take place in Lokoja, Kogi State from November 9 to November 14, 2014, Ikioda said that isolated incidents that occurred should not be interpreted as an increase in piracy and kidnapping in the maritime domain.

The chief of policy and plans explained that the determination of the Navy to tackle the incidents of crude oil theft, piracy and kidnapping led to the establishment of three commands for effective patrolling of the nation’s waterways.

Ikioda stated that the establishment of the Central Naval Command, where most of the crimes are committed, had resulted in a drastic reduction of such crimes in the nation’s waters.

“The Navy is doing the best it can in the present situation to maintain the waterways; that does not mean we will not have one or two cases…

“We can’t be everywhere but we are doing our best to react to calls as they occur. We try to do the needful where the navy is located”.