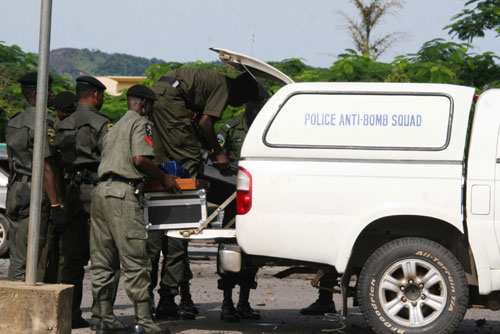 It was learnt that the two IEDs were planted near the market and a Juma’at mosque, both places usually witness large turn-out of people on Fridays.

According to witnesses, nobody was killed but shops and stalls near the market have been destroyed even as the explosives, which were detonated in a controlled explosion, left in their wake, large craters near the scene.

It was gathered that tragedy was averted when the attention of youth vigilantes, also known as civilian JTF was drawn to the scene.

“The civilian JTF immediately called the Anti-Bomb Squad and the army. They cordoned off the area and swung into action”, said Marafa Abdul, a trader near the scene.

“They detonated the first blast but the impact suddenly ignited a second one which nobody knew was there. We are happy nobody was affected”, Abdul added.

The Gamboru market, in terms of size and patronage, is next only to the Monday Market, which was scene of a deadly twin suicide attack on Monday.