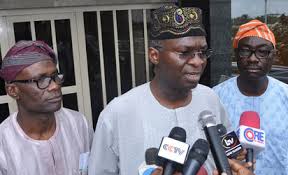 Governor Babatunde Fashola of Lagos State on Friday said he was disappointed at the postponement of distribution of Permanent Voter Cards, PVCs, in nine local government areas of the state.

The Independent National Electoral Commission, INEC, had on Thursday said that it would no longer distribute PVCs in nine of the 20 council areas of the state from November 7 to November 9, as earlier scheduled.

In a television broadcast, the governor said the state residents were equally disappointed at the development.

He said INEC’s decision not to commence the distribution in the nine local government areas resulted from poor planning.

Mr. Fashola said that INEC disregarded the rights of the citizens.

The governor said that INEC had shifted the exercise twice in the past.

He said, “A few days ago, I raised an issue about the delisting of no fewer than 1.4 million registered voters in the state from INEC’s register; the latest development was insult upon injury”.

Mr. Fashola said that INEC’s excuse was not tenable.

“I am deeply disappointed at this display of lack of planning that speaks volumes.

“I wish to recall that it was INEC that first announced that this exercise was planned for August.

“It later shifted it to September, and then, today; yet it did not get it right.

“If this is a foretaste of what we should expect in the general elections, it is a bad start”, he said.

The governor regretted that his constituency, Surulere Local Government Area, and those of his deputy and the Speaker of the State House of Assembly were affected by the postponement.

He, however, urged residents of the remaining 11 local government areas, where exercise would take place, to participate actively in the process.

He noted that the state government had declared Friday work-free to enable its workers to participate actively in the exercise.

The governor implored the residents to remain peaceful and vigilant.

He said that the government would stand against anything that could infringe on their rights.