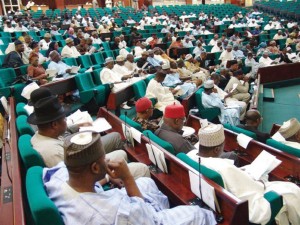 The House of Representatives on Thursday rejected the extension of emergency rule in the three troubled states of Adamawa, Borno and Yobe states for a fourth time.

The Chairman of the House Committee on Media and Public Affairs, Rep. Mohammed Zakari, said the lawmakers rejected President Goodluck Jonathan’s request for further extension of state of emergency in the three North-East states worst hit by Boko Haram insurgency.

The Senate met twice – on Tuesday and Wednesday – without approving President Jonathan’s request as senators from the affected states vowed to block the proposal.

Disclosing the outcome of the executive session of the House yesterday to journalists, Mr. Zakari said members resolved that the Federal Government should rely on the provisions of the constitution to deploy military personnel to further combat insurgency in the affected region.

He said, “We have not extended the emergency rule, rather we have asked the president to rely on section 8 of the Armed Forces Act which empowers him to deploy the military to troubled spots of the country.

“If we had approved this today it would have been the fourth on the series.

“You remember the request for emergency rule started in May 2013 and therefore we had done three extensions.

“In anything you are doing, you should be able to take stock; you will be able to see whether or not that action you are taking is yielding results.

“We will be doing more good if Mr President relies on that more.

“Because if we are adopting a particular style and it is not giving us the desired result, we should be able to change it.

“The armed forces act empowers him to deploy soldiers to troubled parts of this country for them to take necessary action.

“This issue was looked at critically at the executive session and we came to this conclusion”.

Mr. Zakari, however, enjoined Nigerians to play their own part in the fight against insurgency currently affecting the country.

He also condemned the action of overzealous security operatives, who prevented the Speaker of the House of Representatives, Aminu Tambuwal, from entering the National Assembly.

According to him, “we see it as one of the tests of democracy. Our 7th assembly is insistent on the independence of the legislature; whatever happens in the House of Representatives can be determined by 360 members”.