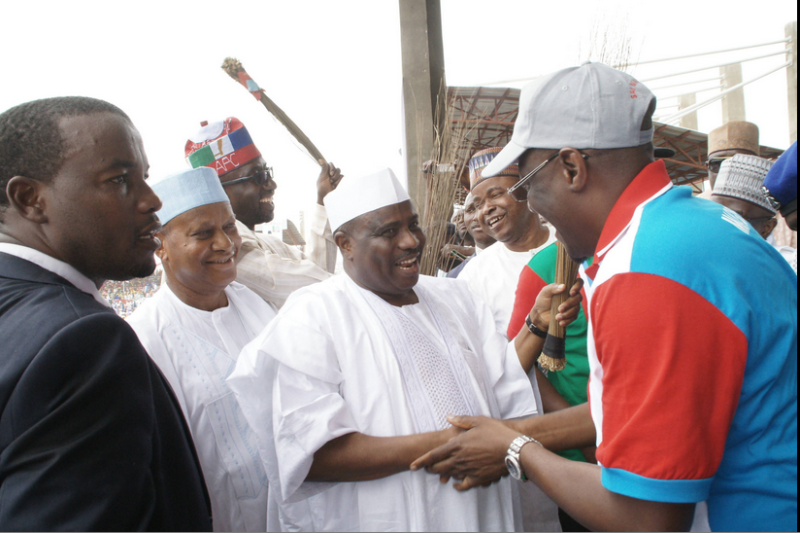 Speaker of the House of Representatives, Aminu Tambuwal, on Wednesday, continued in his criticism of the Peoples Democratic Party-led federal government as he asked President Goodluck Jonathan to resign from office for running “a system that does not have the interest of the country at heart”.

Addressing supporters of the All Progressives Congress, APC, in Ilorin, Kwara State, during the formal declaration of Governor Abdulfatah Ahmed for a second term, the embattled speaker warned that should the president fail to resign, Nigerian voters should revolt against him at the February presidential poll.

Tambuwal had, at the APC extra-ordinary convention last week where he formally announced his defection from PDP to APC, said the opposition party would chase out the “cabal” running the country at the poll next year.

Speaking at the expansive Metropolitan square along Asa Dam road, Ilorin venue of the public declaration, Tambuwal said: “In Kwara state your political history is very rich. You have had the foundation of the political struggle of this state laid by our late leader, Dr Olusola Saraki. This structure that is being sustained by God Almighty who has always delivered Kwara to the right place.

“I believe that this time around there will not be anything different. With the support of the people of the state APC shall form 100 percent the government in the state from the local council to state Assembly and to the government house. Eventually and ultimately the state has always been providing leadership in the politics of this country”, he stressed.

When it comes to presidential elections, the Speaker said, “I am sure that the state will provide such leadership to the extent that we shall deliver this country to the government at the centre to APC.

“By voting APC at the centre you will be voting for prosperity and eradication of poverty. What we are witnessing today in Nigeria is not governance, but misgovernance. We are witnessing a system that does not have the interest of the people of this country at heart. I call on President Jonathan to resign from office because of all these misgovernance and the untold hardship Nigerians are presently passing through. If he fails to do that it is therefore incumbent on us as a people to turn en-masse and vote out Goodluck Ebele Jonathan come 2015. That will bring peace, progress and development of Nigeria”, Tambuwal said.

On his part, former Vice President Atiku Abubakar and presidential aspirant on the platform of APC, said he was a foundation member of the current political dispensation in Kwara State.

While wishing that the late strongman of Kwara politics, Dr. Saraki were alive, Mr. Abubakar said, “We should make sure we sustain the legacy Oloye left behind by making sure that Governor Abdulfatah Ahmed is returned”.

Justifying his bid for second term, Mr. Ahmed said the state was much better than he met it.

“Today, before all of you, I make bold to say we have essentially fulfilled our covenant and in the process strengthened your faith in governance”, he said.

Other APC leaders at the event were presidential hopefuls, Muhammadu Buhari, Governors Rabi’u Kwankwaso of Kano State and Rochas Okorocha of Imo State.