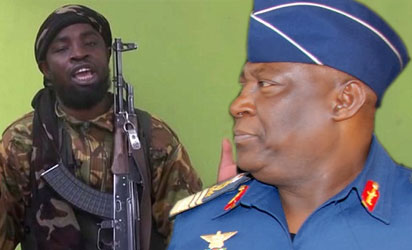 A joint operation of the military and Mobile Police units known as ‘Operation Guerilla’ yesterday failed in their attempt to recapture Mubi – the home town of the Chief of Defence Staff, Air Chief Marshal Alex Badeh – from the grip of Boko Haram

Members of the joint operation, who departed Yola, the state capital in high spirits, are camped at Pakka near Maiha but have been unable to dislodge the insurgents three days after arriving Pakka, which is about 7 kilometres from Mubi.

Soldiers are also said to be camped at Mararaba, about 6 kilometres from Mubi, and are making frantic efforts to gain access into the insurgents’ hideout with a view to dislodging them.

The troops, led by a general, were said to have moved to Pella, about 80 kilometres from Mubi, to join forces with Operation Guerilla to flush out the insurgents, who have renamed the town as ‘Madinatul Islam’ (meaning the City of Islam).

A resident of Mararaba, Miss Phebe James, said: “There is the presence of stern and heavily armed soldiers manning the roads leading to Vimtim, Mubi and Michika towns, which are under the control of Boko Haram insurgents”.

Meanwhile, most primary and secondary schools in Yola have been shut down indefinitely over fears of possible attack by the sect.

Share
Facebook
Twitter
WhatsApp
Previous article15 Drown As Car Plunges Into River In Sokoto
Next articleMy Fate As Speaker Lies With God And Reps, Not The PDP
- Advertisement -Ad ==> Discover how a young Nigerian graduate now makes a consistent 40k per week doing a legitimate online business. You too can start yours now, click here!!!