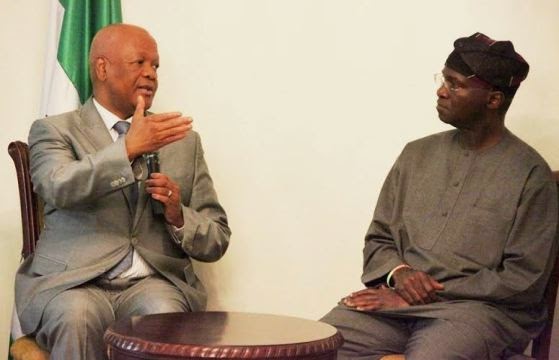 The Lagos State Government yesterday approved the repatriation of 54 dead bodies of South Africans, who were among the 116 that lost their when a guest house of the Synagogue Church of All Nations, SCOAN, collapsed on September 12, in Ikotun area of the state.

Lagos State Governor, Babatunde Fashola, agreed to the return of the bodies during a meeting with the South African Special Envoy, Jeff Radebe, at the Lagos House, Marina on Wednesday

Fashola said the go-ahead followed the conclusion of DNA test, which identified the 54 bodies as South African nationals and apologized for the delay, saying his government is handling the process with caution in order to avoid mistakes in the identification of the bodies.

The meeting between the Lagos Government and South African Special Envoy came on the heels of complaints by the bereaved that the bodies of their loved ones were being held for too long.

Fashola said, “We regret that this has happened here. Unfortunately, I have managed such issue during the Dana plane crash and I understand the anxiety of families who want closure and the religious undertone as well. Our responsibility is to ensure that families get closure. And those culture exist here. I know that this is an issue that has attracted global attention.

“I understand the call by South Africans to get the bodies of their relatives but we cannot at this time get the process wrong because if we release a body, we want to ensure that each family takes the body of their relative. It will be unpardonable for us to make mistake.

“And the choice of South Africa for the test was a special decision to make the process easier for South Africans who bore the bigger brunt of the tragedy. So since the relatives were in South Africa, it was easier to use a laboratory in the country, where we could easily take samples from the deceased families for the test. It was meant to further demonstrate what our intentions were.

“We have no reason to deny you the right to take those 54 bodies, you have my word, you can take them whenever you are ready to do so. It is left for you to decide whether to take them in batches or wait until we conclude the exercise. But if you are ready, my team will ensure that you take them without any delay”.

During the meeting, the State Chief Examiner, John Babafunwa, said the bodies recovered were subjected to post mortem examination of fingerprints, photography and the collections of other samples.

“We had to collect additional DNA samples to assist the laboratory. We’ve been working together and talking to the lab. It is expected that more results will come in more than the 70 we have identified”, Obafunwa said.

Of the 116 persons who died, the identities of 70 have been identified so far, among them 54 South Africans. The rests, from their names, are Nigerians, Togolese and Béninoise.

Earlier, Mr. Radebe had stated that South-African culture and traditions demanded burial within a week of bereavement.

He said, “But today makes it two months since the incident, so I paid a condolence visit to President Goodluck Jonathan two days ago to convey the message of our President (Jacob Zuma) and find ways of speeding up the processes and reparations of the mortal remains of those 85 including those four who carry South African passports even though they are not nationals of our country”.

The envoy noted that arrangements had been concluded to include the four, and take them to Pretoria, from where three would be taken to Harare (Kenya) and one to Kinshasa (DRC).

He said, “The whole nation of South Africa is in mourning, especially the families that have had to endure these two months of waiting in order to bring closure to this whole incident.

“We appreciate your government for the cooperation and our team have been briefing us on the challenges of identifying the bodies. But the bereavement was very tragic indeed and we have to get the bodies back to South Africa”.