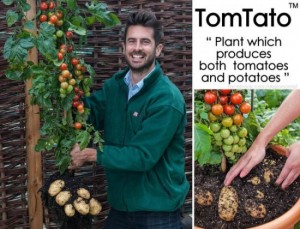 An extraordinary plant that produces both potatoes and  tomatoes has been developed in the United Kingdom. Just one of the seeds can grow more than 500 sweet cherry tomatoes above the ground, and also produce decent crop of white potatoes below. Named ‘TomTato’, the plant is 100 percent natural, and not genetically modified as one would ordinarily expect. Read more:

TomTato, a.k.a ‘veg plot in a pot’, was developed through high-tech grafting by Thompson and Morgan, a horticultural firm based in the town of Ipswich, in Suffolk, England. Although similar plants have been created in the UK before, this is the first time someone has managed to produce a commercially viable version.

According to Guy Barter of the Royal Horticultural Society (RHS), taste was a real problem with past varieties, but the TomTato seems to have hit the jackpot.

“We’re looking at it with real interest because Thompson and Morgan are a really reputable firm with a lot to lose, but I wouldn’t rule out that it could be a very valuable plant to them,” he explained. “In the past we’ve never had any faith in the plants – they’ve not been very good – but grafting has come on leaps and bounds in recent years.”

Thompson and Morgan director Paul Hansord said that TomTato is a result of a decade’s worth of hard work. He first got the idea for the plant 15 years ago, when he visited a garden in the US where someone had planted a potato under a tomato as a joke. That’s when he realized that the two could be grafted together because they belong to the same family. He has been working on the tomtato ever since, and seems to have finally perfected it.

“It has been very difficult to achieve because the tomato stem and the potato stem have to be the same thickness for the graft to work,” he said. But after much trial and error, and with the help of grafting specialists, he managed to hit upon a method of producing a variety of potato with just the right-sized shoot.