Home Entertainment See Video Of Tambuwal And His Aides Forcing Their Way Into The...
Facebook
Twitter
WhatsApp 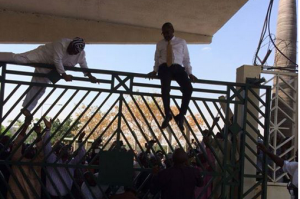 This is an entertainment column, but can a story be more entertaining than the story of politicians who are highly respected in the country jumping fences?!?

Earlier today, several members of the House of Representatives had to scale locked gates to gain access to the National Assembly complex in Abuja after they were stopped by security agents.

Some 1000 soldiers and policemen had sealed the entrance of the National Assembly and physically prevented the Speaker, Aminu Tambuwal, from entering, thereby throwing the complex into chaos.

At least 15 members of the All Progressive Congress, APC, had to scale the gates.

Tambuwal, some House of Rep members were teargassed.

Senate President David Mark eventually had to shut the Assembly down till Nov 25th, next week Tuesday.