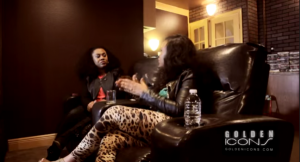 She has tried to keep her intimate life away from prying eyes but people have a way of getting information, especially when it has to do with relationships.

This is actually the first time the veteran Nollywood actress, Stella Damasus would be opening up about this aspects of her personal life that has dominated the media in past years.

Over 3 years ago, Stella Damasus has not publicly responded nor has she granted an interview to anyone regarding the rumors, gossips and side talks on repeated allegations that she’s a “husband snatcher”. She has however opened up in an exclusive down-to-earth interview with Emma Emerson of Golden Icons about her highly publicized and controversial relationship with Daniel Ademinokan.

She also spoke candidly about her personal life including her career, late husband, kids, past relationship with RMD, upcoming projects and several other topics.

The full interview is scheduled to be premiered on December 16, 2014.

Check out the highlights of the interview below: –