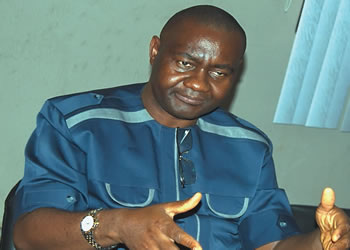 The member representing Rivers South East in the National Assembly, Senator Magnus Abe, has told the ruling Peoples Democratic Party that it cannot remove Aminu Tambuwal as Speaker of the House of Representatives following his defecting from the PDP to APC.

The senator explained that though the PDP was working hard to remove Tambuwal from his position, it would be a difficult task to achieve.

He posited that the PDP could only impeach Tambuwal as the Speaker of the House of Representatives if it can muster 240 votes, adding that without such number of lawmakers, the speaker cannot be removed from office.

Abe, who is chairman of the Senate Committee on Petroleum (Downstream), made this position known on Saturday at the inauguration of the sensitization campaign for the collection of permanent voters’ cards and continuous registration from November 7 – 10, 2014 in Bera, Gokana Local Government Area of Rivers.

“The PDP is working very hard to remove the Speaker of the House of Representatives, Aminu Tambuwal, through the backdoor. But let me tell you today that nobody can remove him.

“The only way they can remove him is if they can garner 240 votes on the floor of the House. The PDP cannot get that number of representatives in the House to remove him.

“As you are aware, the Speaker of the House of Representatives has left the PDP to join our party, the All Progressives Congress, for the same reasons that made us to leave the PDP for the APC.

The lawmaker added that the ruling PDP had tried to replicate the incident in the Rivers House of Assembly in the National Assembly to achieve the removal of Tambuwal from his current position and called on Nigerians to stand up and resist the introduction of confusion in the country.

“So, because they cannot get that through the law, they have tried to turn the National Assembly into the Rivers State House of Assembly. They want to introduce confusion into this country. Nigerians must get up and reject this kind of behavior. And we must say so without mincing words”, Sen. Abe said.