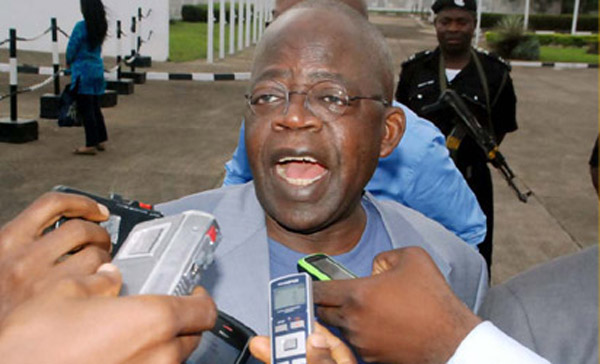 A former Governor of Lagos State, Senator Bola Tinubu, has alleged that the Peoples Democratic Party and the Independent National Electoral Commission have “merged” to ensure that his party, the All Progressives Congress, APC, does not retain power in Lagos next year.

Tinubu noted that just as three legacy parties merged to form the APC and become a more formidable opponent of the PDP, the INEC had also joined forces with the PDP to ensure that the ruling party maintains its hold on power in 2015.

Tinubu made this position known at a press conference to address the “shoddy” Permanent Voter Card distribution in Lagos on Saturday.

The APC national leader, who berated INEC over the manner it conducted the PVC distribution, said the commission had no excuse for failing to put its house in order.

“This exercise is a colossal failure. INEC has the responsibility to give us a date when the exercise would start which they did. They were the ones that picked the date. On the eve of the exercise, they announced they could only carry out the exercise in 11 Local Government Areas out of the 20 recognised by the Federal Government.

“Rather than outright boycott, we endured the frustration and appealed to the public to participate. Our field report and personal experiences indicated that the exercise in those 11 LGAs failed and it is unacceptable. In some instances, you didn’t find INEC and then in some, they did not start on time”.

The former governor said if four months to the election, INEC had yet to put its house in order, it was safe to conclude that it could not conduct a free and fair election next year.

He insisted that INEC must explain in full detail why it reduced the number of registered voters in Lagos from 6.2 million in 2011 to 4.8 million in 2014.

He argued that INEC’s excuse that it reduced the figure because there were many cases of double registration in 2011 was not tenable. He, therefore, questioned the commission’s right to “disenfranchise 1.4 million Lagosians without recourse to a court of law”.

He said, “You cannot automatically, without a court of law, disqualify them, you can only suspend them and give them another opportunity to register. To me, this exercise has failed, it is not acceptable, and we consider it as a rigging exercise. INEC has colluded with the presidency and the opposing party to rig the election from the data to the end”.

He warned that the APC would embark on protests across the state if things were not corrected and urged INEC to publish the names of those who were removed from the voter register.

He also advised INEC to return to the drawing board and start the exercise afresh.

Reacting to the APC chieftain’s allegation, the Chief Press Secretary to the INEC chairman, Kayode Idowu, said there was no reason for the commission to merge with the ruling party.

“INEC has not filed any paper with the country’s Corporate Affairs Commission to be merged with the PDP. It is not a political party”, Idowu said.