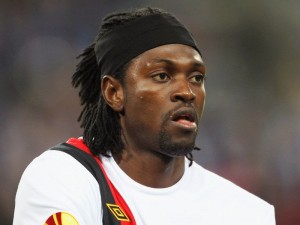 It’s funny how people always accuse other people of using juju or witchcraft immediately something goes wrong in the family. This is an African mentality that needs to stop.

That is the case of Tottenham’s star striker and Togolese player — Adebayor Emmanuel.

The footballer’s cousin has gone on air to accuse Adebayor of neglecting them, including his own biological mother.

“For the past six years Adebayor has rejected his mother and his immediate family whilst doing charity outside on the premise that our mother is a witch,” Adebayor’s cousin Margaret told Peace FM in Ghana.

“We have been thinking of his future as a footballer and did not want this issue out in the media but it is becoming too much. Could you believe Adebayor ordered his machomen to sack our mother and his own mother from a house he built in Togo claiming she is a witch?

“As we speak our mother lives in an apartment rented by our junior brother, Kola Adebayor, who currently lives in Germany.

“My mother weeps bitterly about the issue every day.  Anytime his mother or any of us (his close relatives) call and he realizes, he will quickly cut the line.

“I personally supervised the building of his house in Trassaco and he gave us an apartment in the house. But all of a sudden he changed his attitude towards us, one afternoon his machomen came to drive us away from the house, Margaret told the world openly”

But Adebayor who admitted having problems with his relations, denied the allegation and said they have been the one who have refused to come forward for the situation to be resolved.

“Ask my sister Margaret whether I did not build them a house in East Legon, and what happened to it? I bought my younger sister Lucia a car worth $35,000, where is it?”

“If they want the issue resolved they should stop spreading the news and let’s meet to resolve it but they aren’t willing to do so.” Adebayor said.