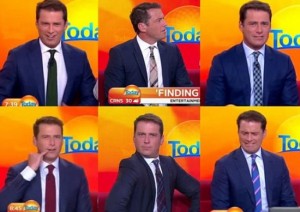 Australian TV presenter Karl Stefanovic, in a bid to highlight the sexism faced by his female colleague, conducted a year-long experiment in which he wore the exact same Burberry suit every day for one year. Funny enough, no one noticed, while his co-host on Channel 9’s Today, Lisa Wilkinson, continued to receive negative comments for her fashion choices. What an irony! Read more according to The Age, and Sydney Morning Herald:

According to Stefanovic, he was concerned by the level of scrutiny that women, especially his co-host, are subjected to for their style. He said that Wilkinson is a victim of regular unsolicited fashion advice from viewers and other mediapersons.

Some of the emails she has received are quite disturbing. “Who the heck is Lisa’s stylist?” an angry viewer demanded to know. “Today’s outfit is particularly jarring and awful. Get some style,” wrote another.

Stefanovic’s anger grew when Samantha Armytage, the host of rival breakfast program Sunrise became a victim too – a tabloid published photographs of her running errands in comfortable clothes. Ignoring their professional rivalry, he immediately offered Armytage his support.

“I’m judged on my interviews, my appalling sense of humor – on how I do my job, basically. Whereas women are quite often judged on what they’re wearing or how their hair is. That’s what I wanted to test,” he explained. “I’ve worn the same suit on air for a year – except for a couple of times because of circumstance – to make a point.”