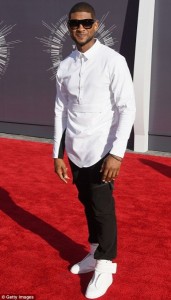 Superstar singer Usher‘s son doesn’t think he’s a great singer. The ‘She Came To Give It To You’ singer revealed that his youngest child, Nayvid, is very critical of his performances.

But his eldest son, Usher Jr., has always been a huge fan and is already showing signs of following in his footsteps. He said: ‘When seeing me perform on tour in the past … and most of the time it’s past his bedtime, but he’s just sitting there studying every move, every second, like laser focus. And then I’ll see him off by himself doing the moves.’

Usher split from the boys’ mother, Tameka Foster, in 2009 after two years of marriage and secured primary custody of them following a bitter court battle, but recently insisted he had no regrets about walking down the aisle. He said: ‘Most people probably think I regret it because I ended up getting divorced, but it helped me learn that sometimes I think I know more than I actually do.’