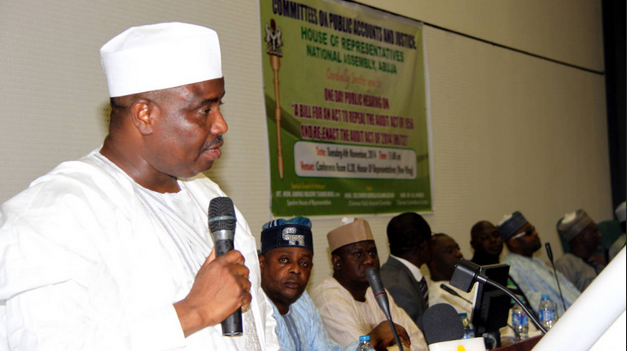 The Attorney General of the Federation and Minister of Justice, Mohammed Adoke (SAN) and the Inspector General of Police (IGP), Suleiman Abba, on Friday justified the withdrawal of Aminu Tambuwal’s security details, saying that he has ceased to be a member of the House of Representatives following his defection to another party and is no longer entitled to rights and privileges associated with the position of Speaker.

The duo contended that having defected from the party on whose platform he was elected, he has lost his membership of the House and “automatically ceased to be the Speaker”.

They argued in a joint counter-affidavit filed in response to the originating summons sent to the court by Tambuwal, challenging the withdrawal of his security aides, alleged threat by the Peoples Democratic Party (PDP) and its leadership to reconvene the House, declare his seat vacate and remove him as Speaker.

The case is being heard by Justice Ahmed Mohammed of the Federal High Court, Abuja.

The AGF and IGP, in the counter-affidavit filed by their lawyer, Ade Okeaya-Inneh (SAN), argued that they cannot be accused of acting in breach of the Constitution by withdrawing the security aides attached to the Speaker because he was no longer occupying the position as at when the security details were withdrawn.

They argued that Tambuwal, having defected from the Peoples Democratic Party on whose platform he was elected into the House, and having purportedly ceased to be a member of the House and its Speaker, is now “an ordinary citizen of Nigeria, is not exposed to any danger or bodily harm because of the withdrawal of his security details”.