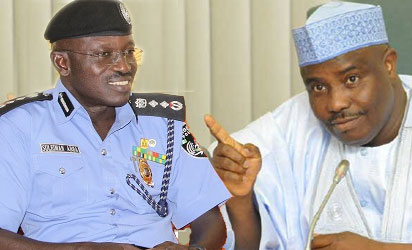 The Ikeja branch of the Nigerian Bar Association (NBA), has asked the Acting Inspector General of Police (IGP), Suleiman Abba, to resign from office for ordering the withdrawal of the policemen attached to Speaker of the House of Representatives, Aminu Tambuwal, who defected to the All Progressive Congress (APC) from the ruling Peoples Democratic Party, PDP.

In a statement yesterday by its chairman, Yinka Farounbi, the Ikeja NBA said: “To say the least, the action of the IGP, apart from being a usurpation of the functions of the third tier of government, the judiciary, is the most disservice and the greatest threat to our democracy, particularly the 2015 general elections”.

The Bar also took a swipe at the acting police boss, accusing him of “arrogating to himself the power of 240 members of the House of Representative and remove the Speaker and went ahead to constitute himself to a court of law and declared the seat of the Speaker vacant”.

The statement added: “Is the IGP not telling the whole world that the police, meant to be for all Nigerians, is a PDP police and that the forthcoming elections in 2015 will be in accordance with whims and caprices of our PDP police?

“Where then is the neutrality of police in the political system of the country?”

The NBA, therefore, challenged Abba to tell the nation who the substantive Speaker is and when “he intends to conduct a bye-election into ‘his declared vacant seat’ of Hon. nay dishonorable Aminu Tambuwal?

“In order to save us enormous resources, can the IGP tell us the result of the 2015 elections so as to limit us to preparation for swearing in only?”