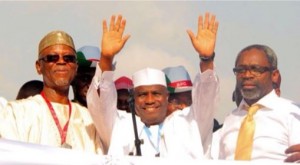 National leader of the All Progressives Congress (APC), Asiwaju Bola Ahmed Tinubu has commended the Speaker of the House of Representatives, Aminu Tambuwal for showing patriotism and demonstrating the true spirit of democracy, by withdrawing from the presidential race of the party

Tambuwal had on Tuesday suspended his participation in the APC presidential primary election, saying he was following counsel from party elders and was making the decision in the overall interest of the party.

“You have demonstrated the true spirit of democracy. You have indeed shown the way to all other party members on the kind of sacrifice expected of them. You are a good example to the young and old and the leading lights of our party,” he said.

“You secured the wish of a virile section of our party, especially your colleagues, Honourable Members who meant well in their desire to have you vie for the highest office of the land. And excited by your politics and candidature, most Nigerians looked in your direction hopeful in the prospects of your candidacy and a New Nigeria.

“But rather than pursue a selfish ambition, you humbly submitted yourself to the service of the common good. Whatever anyone may say, you have made history.”

“Your sacrifice for the cohesion of the party and a greater Nigeria will go down in history as one of the greatest pragmatic and progressive political sacrifices ever made in the politics of our country.”

“You have demonstrated that your political convenience will never triumph over patriotic conviction. You no doubt joined the APC not to advance any personal ambition. Your decision in this delicate moment gave no space for emotion to intrude into the path of objectivity and blind you and many of us from what is best,” the party leader said.

Tinubu described the APC as the best platform to ensure Nigeria achieves the progressive and broad change it craves. He therefore saluted Tambuwal for joining the cause, assuring him; “You will never walk alone!”