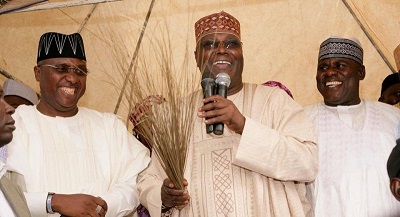 There are indications that the All Progressives Congress (APC) may end up using a consensus candidate as there are increasing fears that former vice president Atiku Abubakar may win the party’s primaries slated for December 10. The leaders of the party are believed to be in support of Former Head of State, Gen. Muhammadu Buhari.

It is believed that the 14 states controlled by APC governors may have clearly aligned depending on the disposition of the governors in those states, Thisday suggests. However, the 22 other non-APC states are expected to vote depending on how each of the aspirants are able to secure their support. Former Head of State, Gen. Muhammadu Buhari may therefore lose the party’s primaries to Atiku, who has gone round almost all the states of the federation to make a case for himself with the delegates. The two other aspirants, Kano State Governor Rabiu Kwankwaso and Publisher Sam Nda-Isaiah may also affect Buhari’s chances, as Abia, Anambra, Enugu, Ebonyi, Delta, Akwa Ibom, Bayelsa, Cross River, Ondo, Ekiti, Bauchi, Gombe, Taraba, Adamawa, Katsina, Jigawa, Kaduna, Kebbi, Kogi, Niger, Plateau and Benue are all states where each delegate vote counts. At the other states controlled by the APC, it is believed that the governor may influence who delegates vote.

According to Thisday, the APC leadership is said to be rooting for Buhari as its candidate, consensus being the only way a majority of those who make up the leadership believe guarantees his candidacy. Atiku on the other hand is banking on his power of mobilisation and poaching of delegates; more reason why he insisted on party primaries while several top members of the party were pushing consensus candidacy. He is said to have spent the last one month meeting with delegates across the federation and had reportedly visited at least 27 states in all.

Expected at the national convention are about 10,000 delegates from across the country.

The party is said to still be contemplating on where to use for the convention, with Edo and Lagos States being considered.