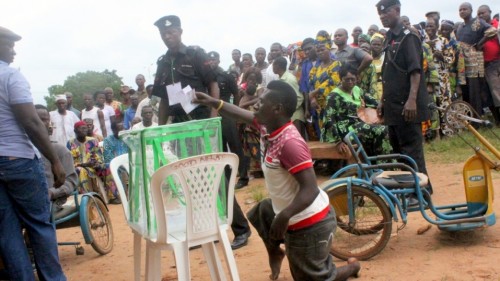 Ahead of the 2015 general elections, the Force Headquarters, Abuja, has disclosed that polling units will be manned by unarmed personnel.

It stated that three unarmed policemen would be at each polling station to monitor the election and secure electoral materials, noting that this would be done in collaboration with other security agencies.

According to a PUNCH reported, the Force Public Relations Officer, DCP Emmanuel Ojukwu, made the disclosure in a telephone interview on Sunday.

The FPRO added that the police would ensure that the electoral process was free, fair and credible.

He stated that the police high command had prepared for a successful transition process and had equally trained its personnel to conduct themselves in a professional manner.

Responding to a question on how the Force intends to do things differently during the elections to assure Nigerians of its impartiality, Ojukwu explained that the police had never been partial to any political party, stressing that they would “do what they have always done”.

He said, “The police have never been partial to any party. During the elections, we will do what we have always done to ensure that the election is free, fair and transparent. Three unarmed policemen will be deployed to each polling unit and they would be supported by security operatives from other agencies to ensure a credible election”.

DCP Ojukwu also cautioned politicians against over-heating the polity, stressing that the country should not be destabilised on account of the political ambition of some individuals.

“The political temperature is rising as expected, but we want to caution politicians not to over-heat the polity. Nigeria belongs to us all and the country will continue to exist after the election”, he noted.

The police image maker also counseled the electorate on the need to conduct themselves peacefully during and after the elections even as he called for support for the security agencies to enable them discharge their duties of providing security during the exercise.